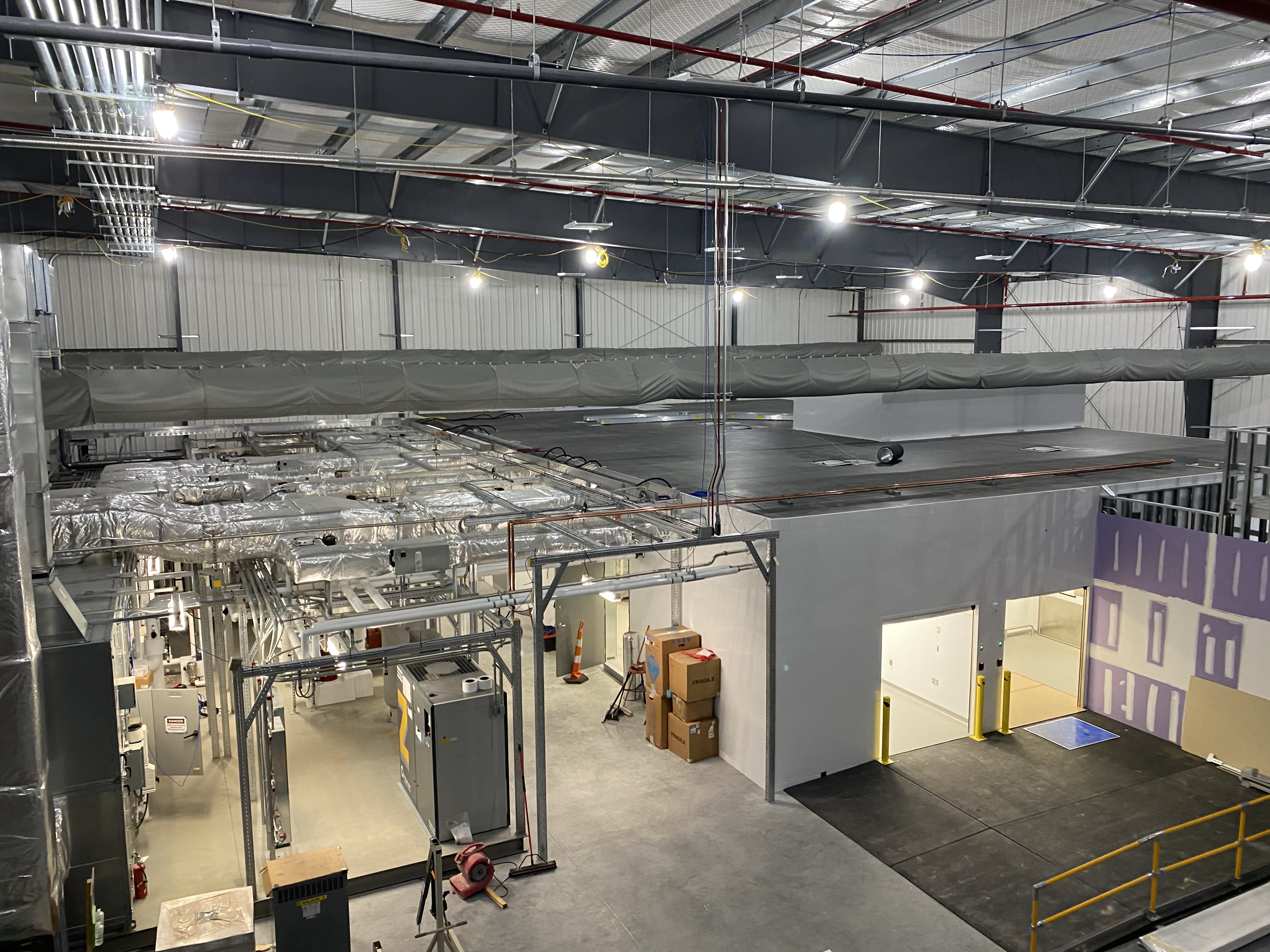 It takes innovation and collaboration to accelerate the design and construction process to bring manufacturing facilities online to produce lifesaving vaccines as quickly as possible.

The Ask: Design, construct, and qualify a vaccine facility capable of being relocated to another site after a period of operation at the initial installation. The facility was to be designed to be as self-sufficient as possible and to only rely on the site for electricity, water, and sewer.

The Solution: The IPS project team worked with modular partners, G-CON Bio and H.T. Lyons, to design and fabricate a modular facility that would be installed in an existing building at the client site. The facility was designed to minimize on-site assembly time and allow the process equipment to be installed after the facility was complete.

The Challenge: After six months of design, procurement, and off-site fabrication, the client decided to relocate the project to a different site but did not change the overall project schedule. The relocation to the new site would require that a new building be erected to house the modular vaccine facility.

Details of Success: The IPS team approached the challenge with determination and a focus on field efficiency to reduce the overall mobilization time. This mindset led the team to concentrate on lean delivery for the project’s success. After the modular solutions were integrated into the project plan, the focus was on activities that must occur on-site while the modular components were being fabricated.

The project team had three focus areas for off-site fabrication: the mechanical area, the clean-room facilities, and the new building.

When it was announced that the project would be relocated from one to state to another, the project team recognized that the new shell building would fall on the critical path. Instead of focusing on a traditional steel building as is typical in the pharmaceutical industry, the design team focused on identifying a solution that could be quickly designed and delivered to the site. The result was a partnership with Bobbitt Construction, a Butler Builder. The IPS design team developed a performance requirement for the building, including critical dimensions & clearances and floor loading requirements, and turned this information to Bobbitt who quickly identified a particular line of Butler buildings that met the project requirements. By leveraging a standard pre-engineered metal building, the project team ordered the structure five weeks after identification of the site change, allowing receipt of the building eight weeks later. Through an aggressive schedule, the project team achieved the dry-in milestone four months after the construction start date and six months after the site change. 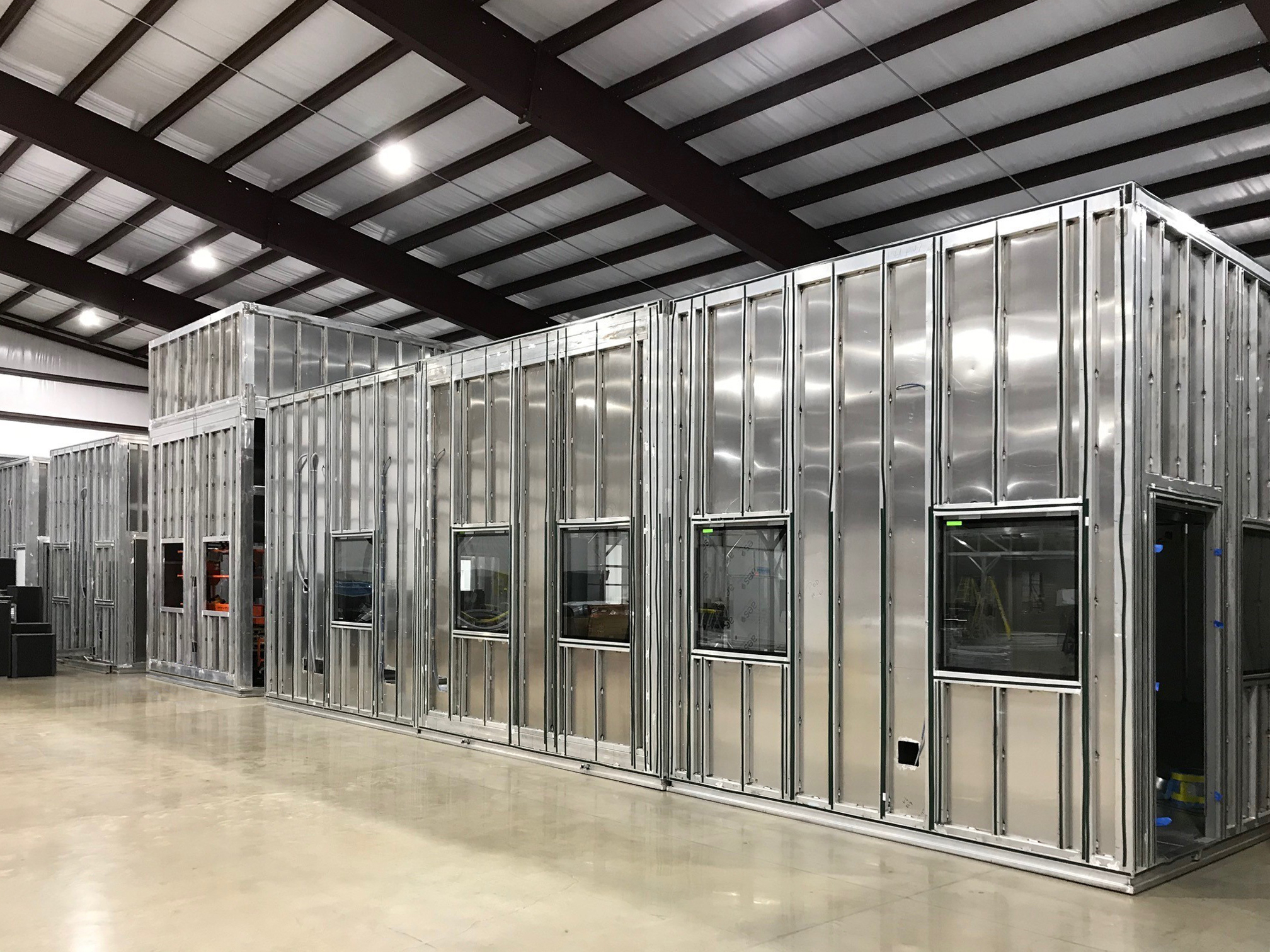 Based on the request for mobility with the vaccine facility, the IPS project team reached out to trusted partner firm, G-CON, who specializes in the manufacture of modular cleanroom facilities commonly referred to as PODs. This cleanroom facility was more technically complex than previously designed and constructed modular cleanrooms. For example, the production area included a piece of process equipment that weighed 30,000 lbs. and required a 15 ft. clear room for installation. The end result was a 3,000sf layout consisting of six 12 ft. x 50 ft. x 13ft. shipping sections and a smaller high-hat area. The layout was optimized to minimize process utility runs across the shipping sections while maintaining the space's required functionality and regulatory requirements. The modular cleanrooms' fabrication involved approximately 31,300 shop labor hours with 5,200 hours of on-site install. The end result was over 85% of project hours were moved off-site contributing to a higher quality and safer installation. Due to the inherent nature of shop work, it is estimated that 20% of labor hours were eliminated (a further savings of 6,260 man-hours). 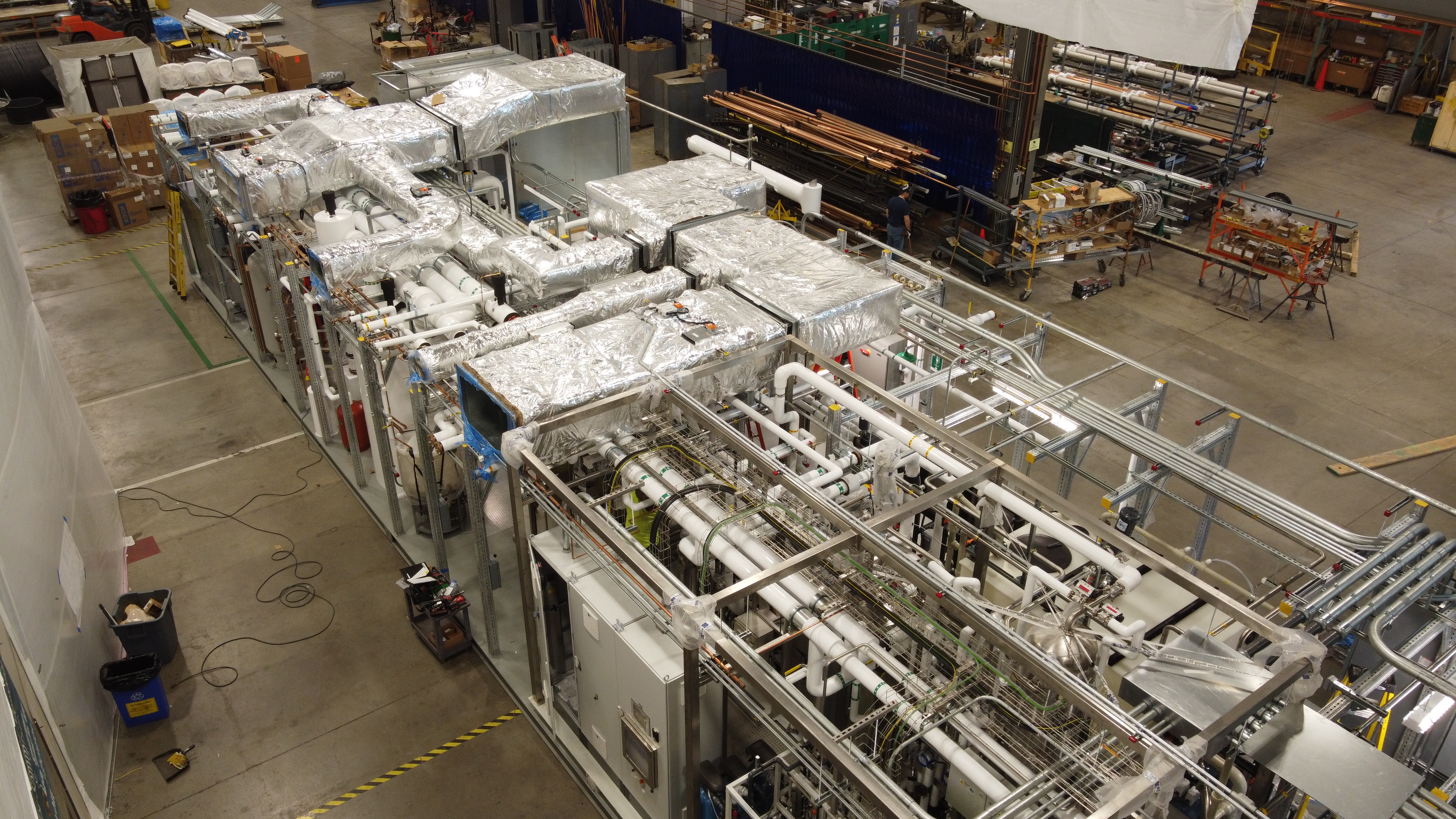 The client originally asked that the project team design and construct a traditional mechanical room for the facility, but upon award of the project, the IPS team recommended that the mechanical room be fabricated off-site, then assembled on-site. IPS again reached out to a trusted partner, H.T. Lyons, to assist in designing and fabricating the mechanical super skid. The end result was a 23 ft. x 90 ft. mechanical room consisting of four modules and a loose ship chiller. H.T. Lyons received and installed multiple pieces of equipment for installation on the super skid, including a makeup air unit, air compressor, waste neutralization system, WFI & clean steam skid (including pretreatment), CIP skid, as well as all of the electrical distribution equipment. H.T. Lyons, took responsibility for all ductwork and piping between the mechanical super skid and the G-CON cleanrooms with all spool pieces and support steel pre-fabricated and shipped to site for installation after both the cleanrooms and super skid were set in position. H.T. Lyons spent 8,100 hours in the shop to construct the mechanical system. An additional 2,230 hours were spent installing the mechanical system in the field. They estimate a 50% savings in hours by performing the work in the shop (4,050 hours) instead of in the field where there would have been constant coordination with competing trades. By executing this work in a modular fashion, the project team moved more than 78% of the work hours off-site.

In summary, the key benefits of off-site fabrication include:

To successfully deliver the project within the timeline, several scope items were coordinated and fabricated on-site in parallel with the off-site fabrication effort. The project team had to develop and identify efficient methods for installation of these elements. The key elements executed on-site included, the erection of pre-engineered metal building, tie-in of site utilities, fit-out of pre-engineered metal building and the construction of the locker rooms.

Erection of the Pre-Engineered Metal Building: 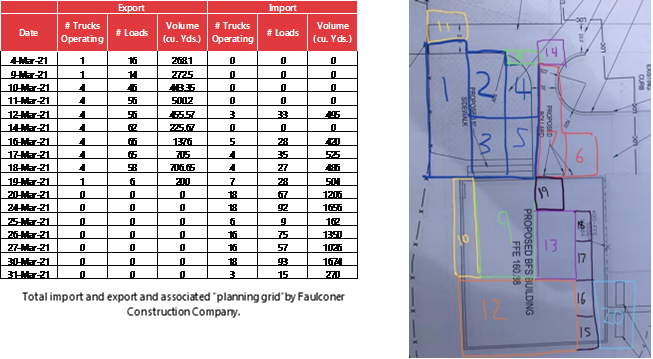 The building erection involved tree removal, extensive removal of unsuitable soils, pouring the slab, erecting the steel, and installing the shell. Because of the site change, the building became the critical path for the project. Due to the site's swampy natural environment, the site work contractor, Faulconer Construction Company, had to remove over 7,000 cubic yards of unsuitable soils and import over 11,000 cubic yards of clean fill. In order to maintain schedule, our team tracked daily truckloads in and out; and challenged the team to be more efficient and identify opportunities to increase daily productivity. The site-work team from Faulconer Construction optimized the volume of trucks, routing of delivery, and soil removal to reach a peak efficiency. The cumulative number of truckloads in and out more than doubled based on learned efficiencies from start to finish. These efficiencies contributed to a savings of 12 work days. The table and zoning diagram show how the team improved efficiency by breaking the site down by required excavation depth and reinstall requirements. The table shows that while there were many factors associated with loading and unloading operations, including weather, access challenges, and other on-site work, the team showed continuous improvement by planning and reviewing the daily results.

After the foundation, slab on grade, and footers were poured; the project team focused on efficienctly erecting the building. The team used a grid pattern to isolate the 16,000sf building into equal work areas and ensured that all trades could move forward without interfering with other disciplines.  The building erection crew had extensive experience installing pre-engineered metal buildings and translated that experience into efficient fieldwork by organizing the components to quickly put into position as they were needed, despite the need for other trades to be in the area. This allowed the main structure to be erected quickly and enabled the crew to move to the standing seam metal roof immediately.  After the roof was approximately one-third installed, the fire protection and electrical contractors began working to install lighting and fire protection with the mechanical and plumbing contractors.  This allowed the project team to finish overhead rough-in work less than 20 workdays after completing the roof.

While the crew was installing the roof, a subset of the building crew began working on erecting the exterior metal wall panels, allowing the electricians to follow with rough-in for wall-mounted devices (fire alarm, outlets, and security). To further accelerate the project and eliminate the need for on-site labor, the project team chose to leverage a fabric duct manufactured by DuctSox. This product is sewn off-site and is hung using a cable stretched across the building. This reduced total installation time by approximately 5 weeks and allowed for flexibility to rig the modular equipment into the space.

With all of these efforts, the project team had the building dried-in on early summer and was ready to receive the PODs on three weeks later (11 months after the initial order placement). By accelerating the dry-in and overhead fit-in, the team kept the process equipment on the critical path. By leveraging the modular structures, our team energized the both the super skid and PODs, and flooded the utility systems two weeks after receipt of the PODs. With extensive coordination and planning, the deliveries of the super skid occurred over two days. By synchronizing the rigging and setting of both the super skid and the PODs, the project team eliminated a second crane mobilization and leveraged the knowledge of its team members to ensure the structures were set in the proper locations. All connections were coordinated and discussed, eliminating the need for one of the crews to mobilize early to assist in this coordination. 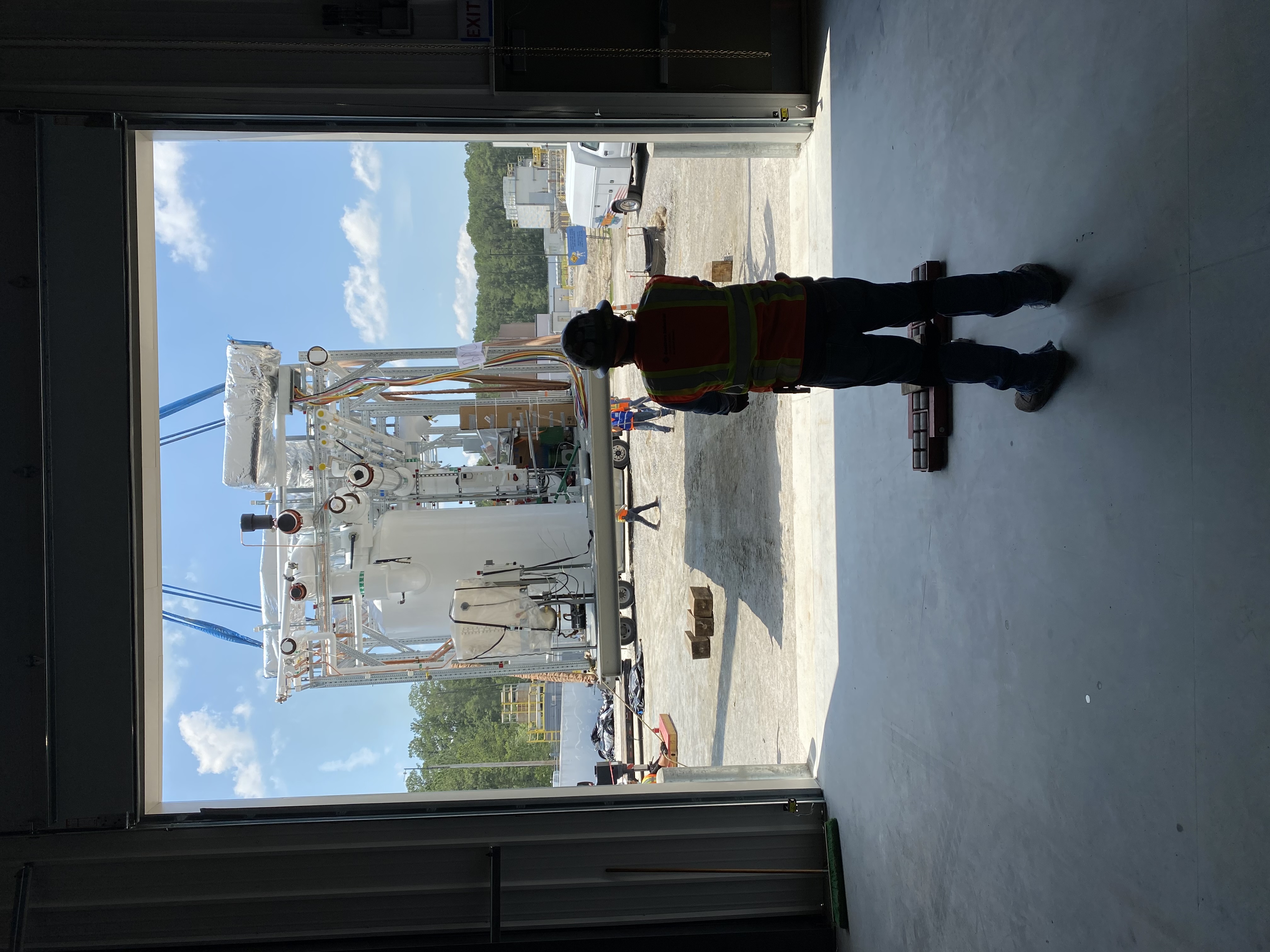 Rigging of Super skid into the building.

Lean Delivery in a Pandemic Environment

The fact the team was able to maintain an accelerated pace on the project amid the COVID-19 pandemic is a testament to the lean principles which were implemented at the onset of the project, and cultured throughout the project life cycle. IPS began construction in early 2020, roughly the same time cases of COVID-19 were being realized across the United States. Though the pandemic was unforeseen, the project team minimized the impact of the situation because of the delivery methods chosen for the project. In addition to the LEAN elements directly related to the daily activities on the project the team made an early decision to isolate the construction site from the operating areas on campus by installing a “ring-fence” around the project and a separate access road for construction personnel and deliveries. The intial plan was that this would minimize non-project personnel in the construction area, but with the pandemic it reduced both the risk on the site and project by reducing the potential exposure pool for both groups. A few key elements that benefited the project from a pandemic management perspective include the following:

By focusing on three key areas of off-site fabrication & preparation and leveraging a disciplined site execution strategy, the project team delivered this critical project on a reduced budget and accelerated schedule. The early planning and receipt of the modular structures allowed the team to shake out the utilities before receipt of the process equipment and be fully prepared for the equipment to arrive. This allowed the team to focus entirely on the process equipment when it was received and avoid competing priorities. The lean project delivery principles and diligent execution of the project plan allowed the owner to sign off on substantial completion 11 months after site selection and less than 9 months after mobilization despite a global pandemic. The project anticipates the lean delivery efforts yielded a 5- to 6‑month reduction in fieldwork, eliminating over $1,000,000 in general conditions costs as well as an unquantifiable amount of risk.